There's No Disputing That Macedonia Is At A Watershed Moment 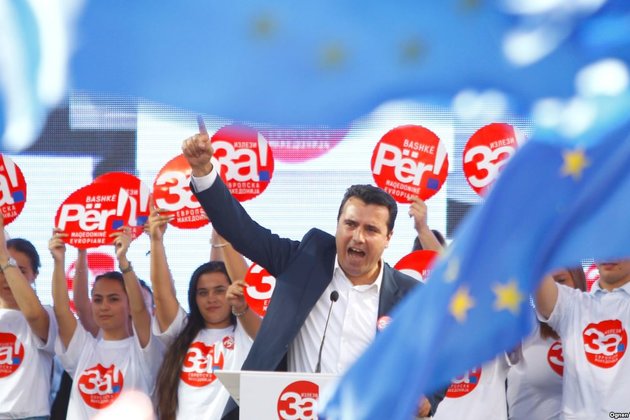 Macedonia's capital, Skopje, has been gripped by hope and uncertainty lately, with the country approaching a historic crossroads.

Macedonians vote in a referendum on September 30 on whether to change the country's name to the Republic of North Macedonia, a possible step toward resolving a decades-old dispute with Greece, which has a province by the same name and has used the dispute as an obstacle to EU or NATO entry for its postcommunist neighbor.

A breakthrough agreement between Skopje and Athens, reached in June, hangs in the balance.

The carrot, dangled explicitly on the ballot, is the prospect of Euro-Atlantic integration.

The referendum is merely "consultative," so a 'yes' result still must be ratified by a two-thirds parliamentary majority before the country could shed the more cumbersome Former Yugoslav Republic of Macedonia name adopted as a compromise to join the United Nations in 1993.

The name dispute is highly divisive among Macedonians, prompting organizers to link the question on the ballot to the prospect of membership in the European Union and NATO in hopes of boosting the 'yes' turnout.

But it is nearly as contentious internationally, with accusations and counteraccusations of improper meddling in Macedonia's affairs.

European leaders have visited the country in the weeks leading up to the vote to urge Macedonians to seize a 'once in a lifetime' opportunity.

Russia is said to be wary of further Balkan countries joining NATO, particularly since nearby Montenegro recently joined the transatlantic military alliance.

Russian Ambassador to Macedonia Oleg Shcherbak was quick to accuse the West of applying "very strong media and psychological pressure" on Macedonian voters. Shcherbak said nothing of the anti-referendum Internet trolls that are said to be urging Macedonians to boycott the vote.

U.S. Defense Secretary Jim Mattis, on his way to Skopje to urge a 'yes' vote, accused Russia of financing "influence campaigns" to undermine the referendum.

Some of the unsupported claims that are circulating in apparent support of a 'no' vote include speculation that Google would drop the use of the Macedonian language if the name change is approved.

The 'no' lobby -- some of it anonymous via social media or shadowy websites -- appears to be banking on a boycott, which could render the result meaningless (it requires more than half of the country's roughly 1.8 million eligible voters to turn out) or simply create space for political elements to exploit.

The New York Times reported that new posts are popping up daily on Facebook to encourage people to boycott the referendum in a 'disinformation-age battle.'

Meanwhile, the nationalist opposition party, VMRO-DPMNE, has called on its supporters to boycott the vote.

Others have pointed out that refusing to vote might be counterproductive.

"The boycott only means that you leave others to make the decision for you," the president of the National Youth Council of Macedonia, Blazen Maleski, wrote on RFE/RL's youth online column. ​

Two young pro-government activists addressed passersby at the entrance to Skopje's old town on September 16, with one of them at one point explaining his trust in the prime minister, Social Democratic Union leader Zoran Zaev.

"He didn't enter politics to get rich,' he said. 'He was already wealthy, as he was a part of a very successful family business. His family produces the best ajvar' -- a traditional vegetable spread based on peppers and eggplant -- 'and he grew up selling papers at the market."

They said their enthusiasm for the name change was not shared by their parents, who they predicted would nevertheless reluctantly vote "yes."

"They are not happy to be in this situation. They are attached to the name Macedonia,' one said. 'Their ID card would say that they are from the Republic of North Macedonia, and that sounds strange to them. They are likely to vote 'yes' because of us, as our future is at stake."

Of course, negotiations with Greece will continue in the event of a "yes" vote, and Macedonia may have to make more concessions.

"The outcome of this process depends...on the negotiating and political power of the countries themselves," academic Taki Fiti, president of the Macedonian Academy of Arts and Sciences (MANU), told RFE/RL's Macedonian unit. 'Greece has much greater negotiating power.'

For many outsiders, it might be hard to understand why the addition of a simple geographic prefix (North) to a country's name would be so problematic.

Skopje is flooded with referendum posters urging people to vote for the name change and "a European future," but some Macedonians object to what they regard as the flip side of that coin.

"Europe wants to take away all that we have. They want to take away our name. I was born a Macedonian, and I want to die a Macedonian,' Zoran Stojcevski, a Skopje cab driver in his 60s, told RFE/RL recently. 'They want to erase our name. They want to 'civilize' us. I don't want to be civilized! I just want to stay the way I am, and they can call me primitive if they want. This government is worse than a communist government. They put people in prison if they are against the referendum."

There has been no evidence of such cases, but the identity fears are real.

Zana, a woman in her 50s, offered a glimpse of that fear while giving a tour of Skopje this month to her British friends.

"It's not only about the name, they want to take our past away from us,' she said. 'They want to say that we [Macedonians] were not there [at the time of Alexander the Great]. They are taking away our identity."

Some things will certainly change if the "yes" vote decisively prevails in the referendum.

The currently nameless equestrian statue in Skopje's central square has been one of the symbolic battlefields in the dispute with Greece. It was erected as a monument to Alexander the Great -- known in some quarters as Alexander of Macedon -- but many Greeks have sought to discourage Macedonians from considering Alexander to be part of their culture.

If the country's name change is ultimately approved by both sides, the horseman will once again bear the name of Alexander but with an explanatory plaque that the ancient king is part of "Hellenic" culture.

It is one reflection of the awkward compromises that might be required of Macedonia, in particular.

But for many, that is a small price to pay, given the stakes.

"The name-change deal with Greece must not fail because that would mean a very uncertain future for Macedonia," former Foreign Minister Professor Denko Maleski told RFE/RL's Macedonian unit. ​

The failure of the referendum, among other things, would likely deepen divisions in Macedonian society, with many in its ethnic Albanian community -- around one-quarter of the country's population of 2 million -- enthusiastically in favor of the name change and Western integration.

"The ensuing division [would] closely resemble the Ukrainian situation, which [would] destabilize the country," Maleski said.

There is notable support for the "yes" vote within the Macedonian Orthodox Church.

Bishop Pimen, who is widely regarded as a "new wave" priest, said the September 30 that the referendum was a great opportunity.

"We are deciding the future of our country, and we must all hold hands, to overcome our differences and quarrels, and come together to choose a European future for our country. This is a historic opportunity that we must not miss," Pimen said.

His message incurred an avalanche of insults and hate speech on social media, prompting Pimen to respond that people were free to disagree with him but that he did not approve of the way in which some were expressing their views.

"In Macedonia, we need to learn basic manners first, and only then should we have democracy," he said.

The views expressed in this blog post do not necessarily reflect those of RFE/RL. Gordana Knezevic

Gordana Knezevic writes the Balkans Without Borders blog for RFE/RL. She was the director of RFE/RL's Balkan Service between 2008 and 2016.