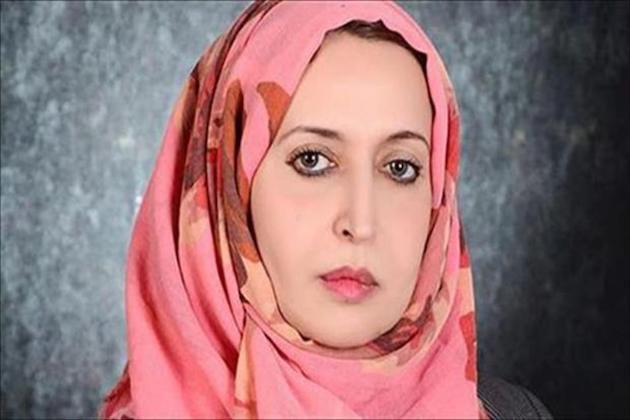 TRIPOLI, Libya - An international human rights group has called on the Interim government in eastern Libya to exert all efforts to ensure the safe return of Seham Sergewa, a member of parliament who was abducted from her home in the eastern city of Benghazi a month ago.

The Interim Government, which controls Benghazi and is one of two governments that claim legitimacy in Libya, denied that it or any forces linked to the Libyan National Army (LNA), an armed group that supports it, had any role in Sergewa's abduction.

Its interior minister blamed unidentified "terrorist groups who infiltrated Benghazi" for the abduction. However, relatives and Benghazi residents with knowledge of the incident said that they believed LNA-affiliated groups were behind the abduction and that some cars used in the abduction identified the groups.

"Blaming the kidnapping of an outspoken sitting member of parliament on unidentified terrorists is not helping find out where she is," Eric Goldstein, deputy Middle East and North Africa director at Human Rights Watch said Friday. "The authorities need to do everything they can now to identify the kidnappers and locate Sergewa, and to ensure protection for her family."

Interior Minister Ibrahim Boushnaf said the attackers shot Sergewa's husband and one other person whom he did not identify. Sergewa's United States-based family has said that Sergewa's husband had gunshot wounds to his eye and leg. He is in a Benghazi hospital and his health status remains unclear.

Sergewa has been outspoken in opposing the continuing military assault by the LNA commander, General Khalifa Hiftar, on the capital, Tripoli, where the internationally recognized rival government, the Government of National Accord (GNA), is based. In an interview on July 16, the night before she was abducted, with a pro-LNA TV station, Al-Hadath, she reiterated her opposition to the ongoing armed conflict in Tripoli. She stated her support for a unity government in Libya and denounced "extremists" on both sides of the conflict.

The two rival governments have been embroiled in an armed conflict since April 4, when Hiftar's forces and allied armed groups attacked the southern suburbs of Tripoli. More than 1,000 people have been killed, including more than 100 civilians, and hundreds of thousands of people from Tripoli and environs have fled their homes as a result of the fighting, according to the United Nations Mission in Libya. The LNA is allied with the Interim Government and the House of Representatives, both based in eastern Libya, and exercises effective control over eastern Libya and parts of the southern region. The Tripoli-based GNA has alliances with groups in western Libya, where it exercises nominal control.

Human Rights Watch said Friday it communicated by phone with relatives of Sergewa in the United States and with Benghazi residents who were in the vicinity of Sergewa's family home during the attack and who witnessed the events. They asked to remain anonymous for fear of retaliation. Two residents said that at around 2:00 am on July 17, dozens of white Sport Utility Vehicles (SUVs) commonly used by armed groups in Benghazi arrived and closed off the entire neighborhood.

They said that all the men wore face masks and while some were wearing green army fatigues, the majority wore black uniforms. An account of the incident shared by U.S.-based relatives of Sergewa said that some of the cars used were linked to an LNA-affiliated group known as 106th Battalion. One of the two residents who spoke with Human Rights Watch said that one of the cars was blue and red and was a type of car typically used by the military police in eastern Libya.

Both residents said they heard shooting and observed that Sergewa's house was completely dark, as if the electricity had been cut. They said no one was allowed to go near the house during the incident as the attackers locked down the whole neighborhood. They said that cars from the Interior Ministry's Criminal Investigation Department and other police cars arrived only after the assailants had departed. This contradicts statements by the interior minister that his forces engaged in a firefight with the assailants.

One resident said that after the cars had left, in the early hours of the morning, the resident noted that the house had been damaged by fire. One resident said the attackers had spray painted in black at the main entrance of the house, "The army is a red line," and "Avengers of Blood." This is a reference to an LNA-affiliated armed group that is responsible for human rights violations in the east and that largely consists of relatives of people who were killed by purported terrorists.

The kidnapping of Sergewa and violence against her family as well as the burning of her home follows a well-documented pattern of violence, reprisal, and intimidation by the LNA-affiliated armed groups in Benghazi amid total impunity for their actions, Human Rights Watch said.

There have been dozens of cases of enforced disappearances and killings of journalists, activists, and politicians in eastern Libya since 2014, including the killing of Salwa Bughaighis, a prominent human rights lawyer and women's rights activist, on June 25, 2014 by unidentified assailants.

Enforced disappearance – the deprivation of liberty by agents of the state or affiliated groups, and concealment of the fate or whereabouts of the person in custody – is prohibited under international law. The authorities are required to investigate and take appropriate measures to protect relatives from any ill-treatment or intimidation during the search for a disappeared person.

Since the start of the so-called Karama operation led by Hiftar in Benghazi to "root out terrorism" in May 2014, scores of opponents or suspected opponents of the LNA have fled their homes in Benghazi and remain displaced in other parts of the country, prevented by the LNA and affiliated groups from returning. Human Rights Watch has documented among those forcibly displaced cases of enforced disappearances of relatives, torture and other ill treatment, harassment and intimidation, destruction of property, and appropriation of real estate by forces loyal to or affiliated with the LNA in eastern Libya.

All parties to a conflict are required to abide by the laws of war. Certain serious violations of those laws, when committed with criminal intent, are war crimes.

Anyone who commits, orders, assists, or has command responsibility for war crimes can be prosecuted by domestic or international courts. LNA commanders, including senior LNA leadership, may be criminally liable for war crimes of their subordinates if they knew or should have known of the crimes and failed to take measures to prevent them or hand over those responsible for prosecution.

The International Criminal Court prosecutor, Fatou Bensouda, has a mandate to investigate crimes against humanity, war crimes, and genocide committed in Libya since February 15, 2011. Human Rights Watch say research in Libya since 2011 has found rampant violations by all parties to the conflict of international human rights and humanitarian law, including mass long-term arbitrary detention, torture and other ill-treatment, forced displacement, enforced disappearances, and unlawful killings.

"Senior Libyan government officials, both civilian and military, need to know that they can and should be held accountable by local or international courts if they fail to make serious efforts to end the violations," Goldstein said.