Military Action Escalating Along With Humanitarian Crisis in Syria 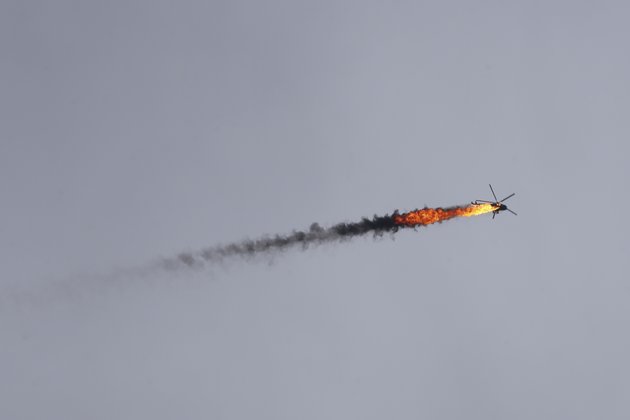 AMMAN - Military activity and the humanitarian crisis both intensified Tuesday in the city of Idlib as Turkey and its allies clashed with Syrian forces, whose northward drive has rendered over a half-million Syrian civilians homeless since December.

"I could not reach the helicopter crash location because the whole area is being bombed," said Abd Albaset, a 32-year-old refugee from Ma'arat al-Nu' man, who now works as a freelance war photographer in the embattled Syrian province. "The attacks on Idlib itself make it clear that nowhere in this area is safe."

The opposition Syrian channel Orient TV claimed airstrikes killed 12 civilians and injured another 33 in the attack on downtown Idlib.

"Our teams documented the killing of 208 people in January, including 60 children and 28 women," said Sayeed Mousa Zaidan, spokesman for the area's civilian defense force commonly known as the "White Helmets."

"In February, we retrieved the bodies of 127 people, 12 of them were today, after regime airstrikes on Idlib city. Northwestern Syria is witnessing the largest military campaign to date by [the Syrian] regime, Russian and Iranian forces," Zaidan said.

Turkey is increasingly intent on blunting the offensive, which it claims is a complete violation of the 2018 de-escalation agreement it brokered with Moscow purporting to provide "safe zones" for Syria's civilians.

On Monday, the Turkish Defense Ministry said that its forces, together with the allied opposition Syrian National Army, hit 115 Syrian government targets "neutralizing more than 100 of their personnel."

"The recent deployment of Turkish military has significantly increased in the last two weeks both in terms of equipment and ground troops," said Ammar Kahf, executive director of the Omran Center for Strategic Studies, a Syrian affairs research organization in Istanbul.

Kahf estimates that Ankara has committed over 5,000 ground troops along with heavy artillery and long-range missiles in the area, and that is not including the increase in weaponry for its allied Syrian National Army.

"This is the biggest build-up of force by Turkey so far, but it still seems within the defensive mode in terms of preventing the further advance of the regime into Idlib," Kahf said. "They are trying to keep this zone out of [Syrian President Bashar al-] Assad's hands until after the implementation of a political process for Syria."

But as the fighting escalates, social services in the area are grinding to a halt, despite renewed cross-border aid shipments.

"As a result, our group made the tough decision to cease its education and anti-extremism programs after our staff fled for safety," Khatib said.

The U.N. is warning that its means to cope are running thin.

"Since the beginning of December, some 689,000 women, children, and men have been displaced from their homes in northwest Syria. That's more than 100,000 people in just over a week," said David Swanson, U.N. regional spokesperson in the Turkish border town of Gaziantep.

"This latest displacement compounds an already dire humanitarian situation in Idlib. Over 400,000 people were made homeless between the end of April and the end of August, many of them multiple times," Swanson added.

The U.N. has released a new Humanitarian Readiness and Response Plan for northwest Syria, calling for an additional $336 million for the next six months to deal with the new wave of refugees.

Nighttime temperatures in Idlib are dipping below freezing, and the U.N. said the pressing need is for shelter to protect against the harsh winter conditions.

"A baby died today from the cold in my camp," said Faisal Alhamoud, another refugee from Ma'arat al-Nu' man, a town 40 kilometers south of Idlib that fell to government forces last month.

Alhamoud said about 35 refugees, including 15 children, have been killed by shelling at the makeshift camp, just 17 kilometers from the Turkish border.

"Many children are vulnerable to death as a result of the weather and the bombing, unless we provide them with help," said Alhamoud, 35, a child welfare worker and father of six. "God will ask us about them on Judgment Day."