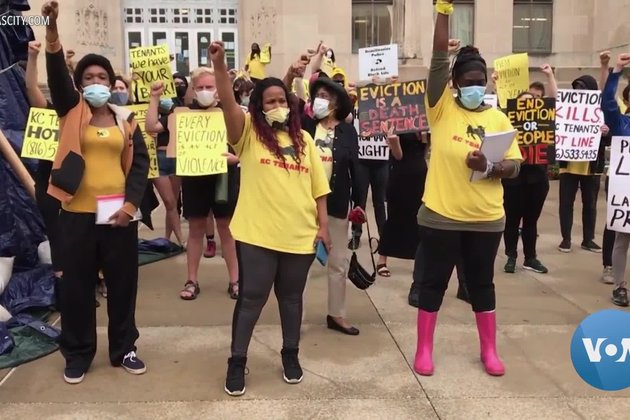 WASHINGTON/KANSAS CITY, MISSOURI - For Ashley Johnson, a national housing group's warning that millions of people faced risk of eviction from their homes by the end of the year - a direct result of the economic slowdown and massive job losses caused by the coronavirus outbreak - became reality.

Johnson, a young mother of three who lives in the Midwestern city of Kansas City, Missouri, was evicted in September.

"Mentally I'm an emotional wreck," Johnson said quietly as her children watched television in a nearby room. "I recently had to reach out to getting some counseling ... 'cause I can kind of feel myself slipping a little."

In August, the National Low Income Housing Coalition announced that 30-40 million Americans would face eviction in the coming months. The NLIHC is a group that focuses on low-income housing policy and trends and analyzes data to create a forecast for the needs of low-income housing across the U.S.

Around the same time as the NLIHC report, a federal supplement to state unemployment benefits that was providing financial relief to millions under an economic stimulus package ended in July. And a temporary ban on evictions ordered Sept. 1 by the U.S. Centers for Disease Control and Prevention (CDC) came too late for people like Johnson.

Johnson, who holds a desk job, lost crucial income from her side business the virus hit her hometown of Kansas City, she said during an interview with VOA in September.

She said she was a holistic health and wellness coach and drove a cab to help her family stay afloat, "but because of COVID, I don't have these clients no more and so I only have my desk job to rely on."

Johnson was evicted in early September from a private transitional house where she lived with her three children.

"This pandemic and the shutdown have been no picnic for me and my children," she said.

Johnson participates in rallies for KC Tenants, a group advocating for affordable housing in Kansas City.

Like most of the country, the state of Missouri was already experiencing an affordable housing crisis when the pandemic hit.

In early September, organization director Tara Raghuveer told VOA that almost 50% of renters in the state were at risk of eviction because they couldn't pay their rent.

"In the absence of a vaccine, housing was the prescription. We were all told to stay home to keep ourselves healthy and to keep our neighbors healthy, but for millions of people across this country that was never an option, either because they didn't have a home to begin with, because they were housing insecure, or because their home itself was unhealthy to them," Raghuveer said.

Sorry, but your browser cannot support embedded video of this type, you can download this video to view it offline.

In March, Congress passed a $2.2 trillion coronavirus aid package that included, among other things, a federal supplement of $600 a week to state unemployment benefits.

Many Americans had been receiving the assistance, which lapsed in July. That put millions in jeopardy of not being able to pay their rent and facing eviction.

On Aug. 8, President Trump announced an Executive Order to provide "assistance to renters and homeowners" and protect Americans against eviction.

Prompted by the announcement, the CDC in early September issued an order to temporarily halt residential evictions to prevent the further spread of COVID-19.

But the order comes with caveats, Raghuveer said.

"The first and most important is that it's not automatic; it actually puts the burden on tenants to declare to their landlord that they need this protection before they can benefit from it," she explained. "That's a huge barrier for tenants who may not even know about the existence of such protections from the CDC."

So people may be protected for a short period of time from eviction, Raghuveer said, "but they still owe rent every month, and the landlord can still charge late fees, fines and collect interest on that rent, so the mountain of debt, just continues to grow."

"Because it's been clear to poor and working-class people, since the beginning of this pandemic, that the burden of paying rent every month is the burden that they simply cannot sustain during a period of sustained mass unemployment at the scale that we see today," Raghuveer said.

Lawmakers must be part of the solution, insists attorney Gina Chiala, who heads the Heartland Center for Jobs and Freedom, which provides legal advice about housing to low wage workers in Kansas City, Missouri.

"The mass layoffs that are happening in this country are not the fault of those workers who are losing their jobs, and we cannot let our fellow Americans go down in flames," she told VOA. "We need to act; we need to push Congress to do the right thing and pass a robust act and keep in place those measures that we know were stopping the eviction avalanche before."

Sorry, but your browser cannot support embedded video of this type, you can download this video to view it offline.

Chiala also encourages landlords to negotiate with their tenants whenever possible.

But with about half of the nation's rental units owned by mom and pop landlords, many cannot absorb the losses from unpaid rent.

"These are unprecedented times for our association right now," said Tracey Benson, president and founder of the National Association of Independent Landlords. Founded in 1998, the association provides help and support to its 200,000 members nationwide.

"We are hearing from our landlords - they're calling and emailing, worried all over the United States ... they're worried about losing not only their own homes, but their rental homes as well," she told VOA. "And they are also worried of not ever being paid back after this is over."

"So, if my tenants don't pay their rent, I can't pay my bills," she told VOA. But when one of her tenants started falling behind on her rent, Phillips was sympathetic.

She's a single parent, who's unemployed and unable to pay her rent, Phillips explained. "I don't feel comfortable evicting her. I have offered her 50% off her rent for three months with no expectation to pay it back."

In Missouri, Johnson and her children are also experiencing some neighborly compassion.

The family is currently staying in an Airbnb with help from the Mutual Aid Program and donations from local friends, families and members of the community.

But she's not sure how long she can depend on the generosity of others.

Johnson is among the millions of Americans who are holding out hope that lawmakers will reach an agreement on financial relief.

Late Thursday, the U.S. House passed a $2.2 trillion Democratic coronavirus stimulus plan, yet its passage in the Republican-held Senate is unlikely. On Friday, House Speaker Nancy Pelosi and Treasury Secretary Steven Mnuchin continued to discuss measures in a relief package that would include expanded unemployment benefits and other aid for Americans.

If lawmakers fail to reach a deal, experts predict the housing crisis created by the pandemic will only get worse

"The biggest challenge for me is just pretending to be happy right now... because I have to be strong for my kids, you know?" Johnson said.