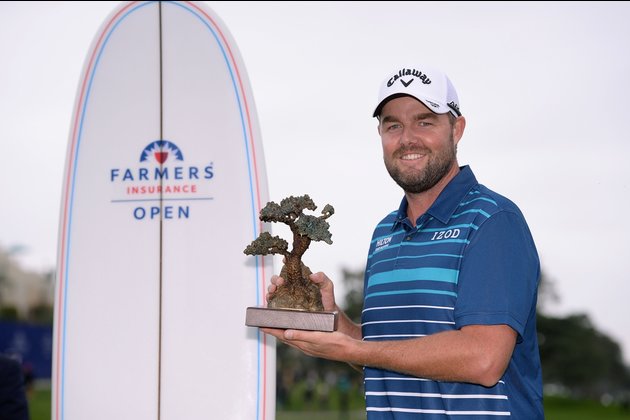 NOTES: The first two rounds will be played on the North Course with the weekend rounds moving to the South Course, the site of the U.S. Open in June. ... Jon Rahm returns to action after withdrawing before last week's event due to a muscle injury. ... Seven-time event champion Tiger Woods is sidelined while recovering from a fifth back surgery. ... Jordan Spieth and 2015 and '18 champion Jason Day will make their first starts of 2021. ... Leishman seeks to join Woods, Phil Mickelson and J.C. Snead as the only players to successfully defend a title at the event. ... Players' spouses and family members are not allowed on-site this week due to COVID-19 safety and precaution measures. ... Korn Ferry Tour standout Will Zalatoris accepted a sponsors exemption as a Special Temporary Member for the remainder of the 2020-21 PGA Tour season. Other sponsors exemptions include former U.S. Amateur champions and Georgia Tech teammates Tyler Strafaci (2020) and Andy Ogletree (2019). ... Reigning APGA Tour Championship winner Kamaiu Johnson will make his Tour debut.

BEST BETS: Rahm (710 by DraftKings) is coming off a minor muscle injury while playing just his second event with new Callaway clubs. He's also a previous winner in 2017 and finished runner-up last year. ... Rory McIlroy (875) finished T3 last year and is coming off a third-place finish in Abu Dhabi last week as he seeks his first win since 2019. ... Xander Schauffele (1200) also hasn't won since 2019 and missed the cut here last year. However, the San Diego native and former San Diego State Aztecs star knows Torrey Pines extremely well. ... Harris English (2200) stumbled to a T32 following his win at the Tournament of Champions. He still has six top-10s in his past nine starts. ... Leishman (4150) is the defending champion and coming off a T4 at the Sony Open, his eighth top-10 finish between January and March over the past three years. ... Brandt Snedeker (16000) provides longshot odds coming off three consecutive missed cuts. However, he is also a two-time event champion (2012, '16) and finished T3 with McIlroy last year.

WASHINGTON, DC: In order to reduce the United States' reliance on the imports of advanced batteries, pharmaceuticals, critical minerals and ...

TRENTON, NJ - New Jersey Governor Phil Murphy signed into law a bill to legalize the recreational use of marijuana ...

The number of healthcare workers contracting the COVID virus has dropped sharply in Ireland since the start of administering vaccines.Fewer ...

If Denmark can vaccinate all, then Ireland should also, says professor

DUBLIN, Ireland - A leading immunologist has said Ireland should seek to vaccinate its entire population by the end of ...

EU expects Navalny sanctions for Russians to be ready next week

BRUSSELS, Belgium - In a largely symbolic move, foreign ministers of the European Union agreed this week to sanction four ...

WASHINGTON, DC - The White House press secretary has told reporters it is not certain whether the United States will ...

NEW YORK, New York - Experts are searching for an answer as to what caused the flu to virtually disappear ...

A triad of intersecting world-wide pandemics simultaneously threatening humanity today are the end results of its own insatiable greedy human ...

LOS ANGELES, California: California has now recorded over 50,000 deaths from COVID-19, representing more than ten percent of the total ...

Texas hearings to focus on failures that left people without power

AUSTIN, Texas: Texas lawmakers have begun hearings into the causes of the enormous power outages that plagued Texas residents at ...

The Devil Is a Woman