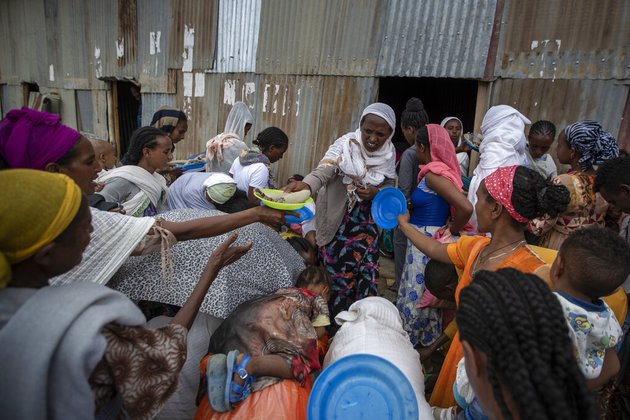 NEW YORK - U.N. aid agencies called Thursday for a humanitarian cease-fire in northern Ethiopia's Tigray region, warning that 350,000 people are already in famine conditions there and 2 million more are just a step away.

"We cannot let Ethiopia starve. We have to act now," U.S. Ambassador to the United Nations Linda Thomas-Greenfield said at a meeting about the humanitarian emergency co-sponsored by the United States and the European Union.

According to a report released Thursday by the global network that guides governments, the U.N. and NGOs in responding to food insecurity crises, more than 5.5 million people overall are in crisis levels of food insecurity in Tigray and the neighboring Amhara and Afar regions.

The Integrated Food Security Phase Classification, or IPC as it is known, warns that the situation is expected to worsen through September, especially in Tigray, with more than 400,000 people projected to face "catastrophic conditions" without immediate assistance.

Three things to do

The U.N. children's agency, UNICEF, says without access to scale up its response, 33,000 severely malnourished children in currently unreachable areas of Tigray are also at high risk of death.

"What do we do about this?" asked U.N. humanitarian chief Mark Lowcock. "Well, there are only three things we need to do: We need to improve the access, we need to scale up the operational capacity of the agencies and we need more money."

Access to people in remote and hard-to-reach areas has been an ongoing problem since the conflict erupted in November between the Tigray People's Liberation Front (TPLF) and the government of Ethiopian Prime Minister Abiy Ahmed.

Lowcock said in May alone there were 131 access violations, which included the interrogation, assault and detention of aid workers. He said Ethiopian soldiers were responsible for 54 of the documented incidents, 50 involved Eritrean troops and four cases included soldiers from both militaries. Another 21 incidents were attributed to Amhara militias and one by the TPLF.

"All of those groups need to improve their behavior," Lowcock said.

Lowcock did acknowledge that the Ethiopian government has tried to reach people across parts of affected areas, and with U.N. help has reached about 2 million people, but that is fewer than half of the 5.5 million in dire need.

FILE - An elderly Ethiopian woman sits next to a sack of wheat given to her by the Relief Society of Tigray in the town of Agula, in the Tigray region of northern Ethiopia, May 8, 2021.

The U.N. Security Council has come in for criticism for failing to take any serious action to pressure the parties to stop fighting, allow aid workers safely in and demand Eritrean troops leave.

The council has met in private a handful of times since November, but some council members have blocked holding a public session. In April, the council issued a statement to the press calling for better humanitarian access but has taken no action to pressure spoilers to comply.

"What are we afraid of? What are we trying to hide? The Security Council's failure is unacceptable," Thomas-Greenfield said. "We have addressed other emergent crises with public meetings. But not with this one. So I ask those who refuse to address this issue publicly: Do African lives not matter?"

Council member Ireland has worked behind the scenes to move the issue up the agenda. In the absence of consensus on holding a public meeting, council members have currently agreed to an informal private meeting on Tuesday.

The G-7 bloc of nations is meeting now in Britain, and the Biden administration has said the Tigray conflict will be on the U.S. president's agenda as he meets counterparts. His Horn of Africa envoy, Jeffrey Feltman, said it is time to move from analysis to action.

"I think that the G-7 summit today will do a lot to light fire under the international community to respond forcefully with funding and unified messages to those continuing to fight in Tigray, those that are and creating tensions and violence across Ethiopia," Feltman said.

The United Nations has appealed for $853 million to assist 5.2 million people in Tigray until the end of the year, with almost $200 million needed before the end of July.