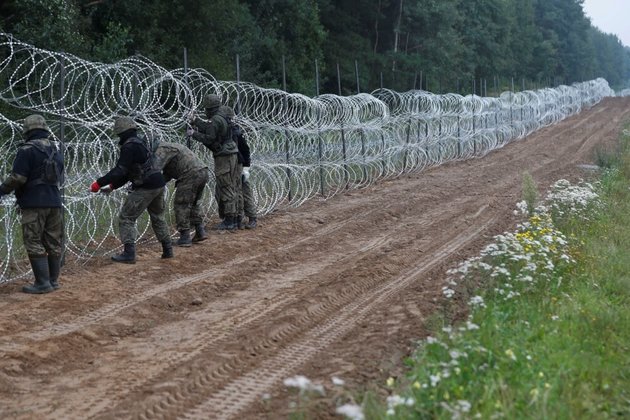 Three people who were trying to illegally cross into Poland from Belarus were found dead near the border, Poland's Border Patrol said on September 19.

Another eight migrants were saved the same day by Polish emergency workers after they got stuck in a swamp as they tried to cross the border.

Seven of them were taken to the hospital, including one who was flown by helicopter.

Polish media said that one of the migrants found dead may have died from exposure to the cold.

Polish Prime Minister Mateusz Morawiecki confirmed the three deaths, but he gave no details about the possible causes.

Polish prosecutors have opened an investigation, he said.

EU members Poland and Lithuania are facing a surge in migrants crossing over from Belarus in what they say is retaliation by Belarusian strongman Alyaksandr Lukashenka for sanctions by the bloc.

The EU has imposed several rounds of financial penalties against Lukashenka, his inner circle, and key state-owned companies to punish the authoritarian leader for the brutal crackdown on peaceful demonstrators.

Poland and Lithuania are building razor wire fences in an attempt to curtail the influx of migrants, who are largely from the Middle East. They have also increased border patrols.

Poland said over 3,800 attempts at illegal crossings from Belarus have been foiled so far in September, over 320 on September 18 alone.

With reporting by AFP