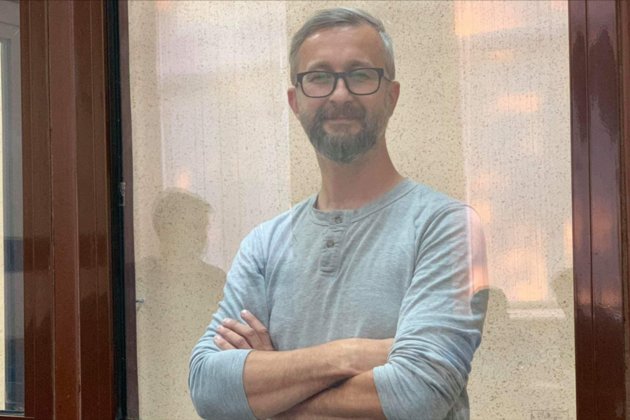 Russia's domestic intelligence agency, the Federal Security Service (FSB), has ratcheted up the charges against jailed Crimean Tatar politician Nariman Dzhelyal over the alleged sabotage of a pipeline last month.

Authorities in Ukraine's Russian-occupied Crimea region detained Dzhelyal and four other Tatar activists in early September, accusing them of sabotaging a gas pipeline near the regional capital, Simferopol, a charge dismissed by Kyiv as fabricated.

Dzhelyal is the deputy chairman of the Crimean Tatar's self-governing assembly, the Mejlis, which was banned in Crimea following Russia's annexation of the peninsula in 2014.

He was initially accused of complicity in committing sabotage, but his lawyer said on September 23 he was later reclassified as a full participant in the alleged plot.

Dzhelyal is now accused of committing sabotage as part of an organized group, as well as the illegal acquisition or storage of explosives, according to lawyer Mykola Polozov.

He faces up to 20 years in prison if found guilty.

The FSB has also accused Ukrainian military intelligence of procuring an explosive device and promising a cash reward of $2,000 to the alleged saboteur to plant it.

Since Russia occupied Crimea, the authorities have prosecuted dozens of Crimean Tatars amid what rights groups and Western governments have described as a campaign of repression against members of the Turkic-speaking Crimean Tatar community and others who have spoken out against Moscow's takeover of the peninsula.

Russia has also backed separatists in a war against Ukrainian government forces that has killed more than 13,200 people in eastern Ukraine since April 2014.

The EU called for the release of the five Crimean Tatar activists, saying it 'considers the detentions to be politically motivated and illegal under international law.'

The United States called on 'the Russian occupation authorities' to immediately release Dzhelyal and 'at least 45 other Crimean Tatars," while accusing Moscow of politically motivated raids and detentions targeting the Mejlis and its leadership.

Ukrainian President Volodymyr Zelenskiy said the case against the five Tatar activists was in retaliation for the inaugural summit of the Crimean Platform, an international initiative to bring about the restoration of Ukrainian-Russian relations by ending the Russian occupation of Crimea.