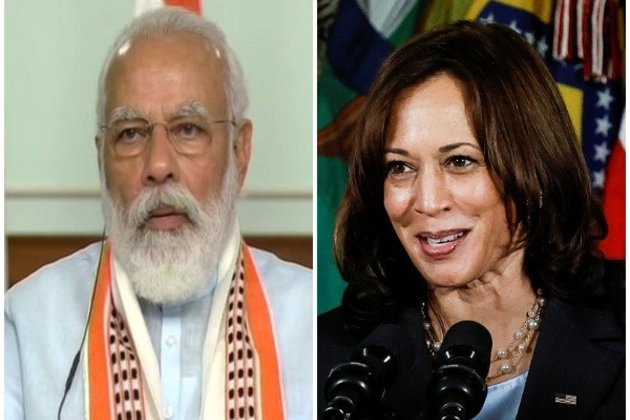 This will be PM Modi's first in-person meeting with Harris after she took office.

Harris shattered barriers, becoming the first Black, Indian-American and female vice president of the United States. And once again, she is scripting history as the highest-ranking Indian American to welcome the leader of her heritage country.

Earlier in June this year, PM Modi held a telephonic conversation with Harris and discussed the US' strategy for global vaccine sharing and the Quad vaccine initiative to fight the COVID-19 pandemic.

Harris' mother, Shyamala Gopalan, was born in the southern Indian state of Tamil Nadu and immigrated to the United States as a teenager where she met Harris' father, Donald Harris, an immigrant from Jamaica.

Harris' maternal grandfather, PV Gopalan, had participated in the Indian independence movement and would later go on to become a senior civil servant in the country, at one point serving on an Indian diplomatic mission to Zambia.

Mukesh Aghi, President and Chief Executive Officer of the US-India Strategic Partnership, explained why the meeting between the two leaders is crucial, saying Harris is quite powerful within the administration and the connection between the two is going to help both countries in the short and long term.

"We are proud, we are proud I think. Are we proud because she's an American? Are we proud that she is the first woman, we would be surprised to break what I call the glass ceiling, but I think more importantly is for Prime Minister Modi to build relationships with Kamala Harris, because you have to understand she comes from the left side of the progressive wing of the party, and they are very much cautious about doing trade deals with nations itself, and they would like to see more of human rights, labour rights embedded into trade deals so I think it's important that the relationship between the Prime Minister and Cabinet house is built," he said,Although Vice President Harris has, in her own words, identified herself as a Black woman, it is still a point of pride for many in the Indian diaspora that a Vice President of Indian heritage will be hosting a bilateral meeting with the Indian Prime Minister.

"She is a force. She is quite powerful within the administration, and I think a connection between the two is going to help both countries in the short and long term itself," he added.

In a statement before leaving for the US, Prime Minister Modi said that his upcoming meetings will provide an occasion for India to strengthen the comprehensive global strategic partnership with the US.

"I am also looking forward to meeting Vice President Kamala Harris to explore opportunities for cooperation between our two nations particularly in the area of science and technology," he said.

Harris and Modi will discuss regional issues, including democracy, human rights, climate change, the COVID-19 pandemic and security, according to a senior administration official who would brief reporters only on the condition of anonymity.

Indian Americans are one of the fastest-growing political forces in the United States. Harris, whose mother was born in India, attracted donations, votes and attention from Indian Americans during her political rise to the U.S. Senate and the vice presidency.

Indian American community believes that the greatest import of the meeting is symbolic.

"Community members think the greatest import of the meeting is symbolic. The prime minister of India will be sitting down face-to-face with the first vice president of Indian origin," said Senior Fellow and Director of the South Asia Program at the Carnegie Endowment for International Peace.

The meeting with PM Modi is one of several meetings Harris is having this week while many world leaders are in the United States to attend the General Assembly at the United Nations' New York headquarters.

Biden will host PM Modi at the White House on September 24. This is going to be the first in-person meeting between the two leaders after Biden took over as the US President on January 20.