Eight Years Ago, Justin Tucker Became a Legend in Detroit 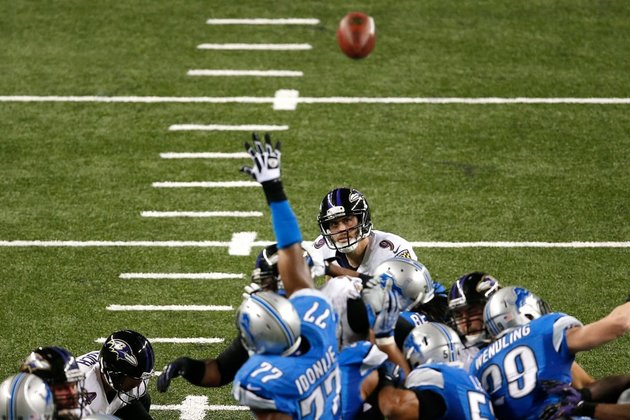 Eight years ago, Justin Tucker was in his second year in the league and had not yet built up his reputation for being the G.O.A.T.

Sure, he was excellent as a rookie. In 2012, his right foot sent the Ravens to the AFC Championship with a frozen double overtime field goal in Denver and he booted a pair of field goals in the Super Bowl XLVII win.

That night, Tucker drilled six field goals. Only 10 times in NFL history had anyone ever hit more in a single game. But the signature moment was his last one, which came from 61 yards away. With 38 seconds left, Tucker boomed a field goal just barely through the Ford Field uprights for an 18-16 victory that left the Lions completely dumbfounded.

As the Ravens prepare to make their first trip back to Detroit since for Sunday's Week 3 game, Tucker said that game and season are a "blur" at this point, but not forgotten.

"That game may have put me on the map, so to speak," Tucker said Wednesday. "I was just in my second year. We had made a bunch of field goals in a row. We were just totally in the zone. To be able to knock down six kicks on 'Monday Night Football' when the whole world is watching is definitely special."

Head Coach John Harbaugh reminisced a little about that game on Wednesday. He recalled not really having a choice about sending Tucker out for the 61-yard attempt - the longest of his career. The Ravens had no timeouts and were facing a fourth-and-8 from the Lions' 43-yard line.

"It really wasn't a decision; it was the only option we had at that point," Harbaugh said. "Joe [Flacco] and the offense did a great job of getting us in position. Boy, I'll tell you; that ball just barely made it through, if you remember, right inside the 'L' of the upright."

Before heading onto the field, Tucker told Harbaugh, "I got this."

Much of the talk this week has been about the trust Harbaugh had in Lamar Jackson to pick up the one yard needed on fourth down to polish off the Kansas City Chiefs on Sunday night. That trust has been building over the years, and Tucker's game-winner eight years ago may have contributed.

"I was relieved because I had just told Harbs on the sideline, right before I went out to kick the ball, 'I got this.' He trusted me and he sent me out there," Tucker said.

"When you say something like that, you've got to come through. Knocking down that kick after Harbs trying to figure out whether we were going to go for this or kick it, he just trusted our operation to go out there and get the job done. I'm really grateful that we did."

The Ravens broke into pandemonium after the kick. Tucker had an epic postgame interview in which he said making the kick was not only great for the Ravens, but also good for his own fantasy team.

A lot has changed over the past eight years. In his 10th season, Tucker is still the most accurate kicker in NFL history (90.7 percent). And he doesn't play fantasy football anymore.

"I'm a dad of a kindergartener now. It's hard for me to find time for fantasy football," Tucker said. "But if I was drafting a team, I would for sure try to take myself in double-digit rounds and no sooner. Otherwise, that's just bad strategy."