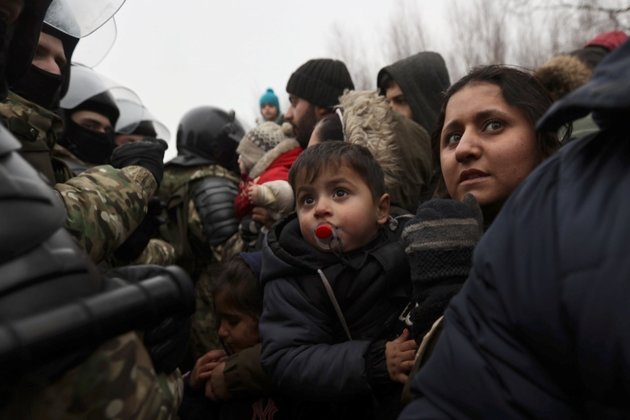 NEW YORK - The United States and European members of the U.N. Security Council condemned Belarus on Thursday for what they called the "cynical instrumentalization of migrants," as tensions simmered along the Polish-Belarusian border.

"We ... condemn the orchestrated instrumentalization of human beings whose lives and well-being have been put in danger for political purposes by Belarus, with the objective of destabilizing neighboring countries and the European Union's external border and diverting attention away from its own increasing human rights violations," Estonian Ambassador Sven Jürgenson said on behalf of seven Western nations. 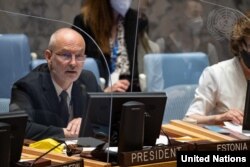 FILE - Sven Jürgenson, permanent representative of the Republic of Estonia to the United Nations, chairs a Security Council meeting, June 16, 2021, at U.N. headquarters in New York.

The flow of migrants from the Middle East and Afghanistan rose sharply after the European Union imposed sanctions on Minsk for forcing a commercial airliner flying over its territory in May to land. The authorities arrested a Belarusian opposition blogger and his girlfriend, who were on board.

Now thousands of migrants who have traveled legally to Belarus face an uncertain fate and freezing temperatures along the border with Poland.

On Tuesday, Poland closed a border crossing with Belarus after migrants tried to break through.

European and Baltic nations accuse Belarusian President Alexander Lukashenko of luring the migrants to his country and then facilitating their travel to the border in order to send them into Poland, Lithuania and Latvia. The migrants apply for asylum when they reach EU member states.

"This tactic is unacceptable and calls for a strong international reaction and cooperation in order to hold Belarus accountable," Jürgenson said. "It demonstrates how the Lukashenko regime has become a threat to regional stability."

"Of course, there is a game of shifting blame now by European Union," Russia's deputy U.N. envoy, Dmitry Polyanskiy, told reporters. "They want to picture Belarus, and sometimes even Russia, as perpetrators of this crisis."

Polyanskiy said Minsk has neither economic nor political reasons to prevent the migrants from continuing onward.

"They have no reasons to send them back to the countries where they came from," he said. "That would be a total violation of any international conventions."

Fearing it could become a new front in the crisis, Ukraine, which is not an EU member, will send another 8,500 troops and police officers, plus 15 helicopters, to guard its border with Belarus, Reuters reported Thursday.

The United Nations has called for de-escalation at the Belarus-Poland border.

"I am appalled that large numbers of migrants and refugees continue to be left in a desperate situation in near-freezing temperatures at the Belarus-Poland border," U.N. High Commissioner for Human Rights Michelle Bachelet said Wednesday. "I urge the states involved to take immediate steps to de-escalate and resolve this intolerable situation in line with their obligations under international human rights law and refugee law."

The U.N. refugee and migration agencies have repeatedly said that using migrants and refugees as political tools is deplorable and must stop.

'With several tragic deaths recorded in the border area in recent weeks, UNHCR [U.N. High Commissioner for Refugees) and IOM [International Organization for Migration] remind states of the imperative to prevent further loss of life and ensure the humane treatment of migrants and refugees as the highest priority," the agencies said in a joint statement Tuesday.

Some information for this report came from Reuters.