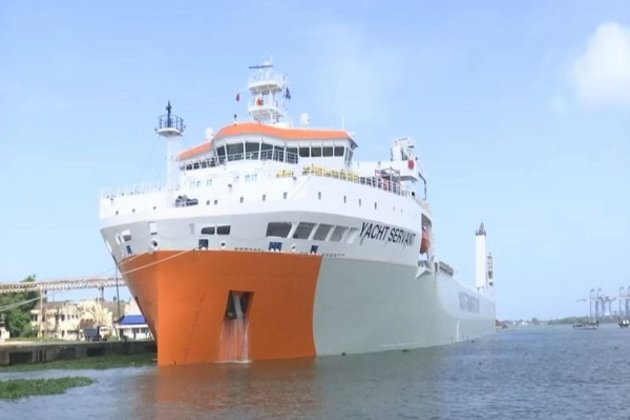 The two vessels were loaded to a large mother ship today and it will be later transported through this yacht transport carrier to Norway.The ASKO project is an ambitious project in Norway, which is partially funded by the Norwegian government as a part of a green shipping programme aimed at emission-free transport of goods across the Oslo fjords.

These vessels will be managed by M/S Massterly AS, which is a joint venture between M/S Kongsberg, the world leader in autonomous technology and M/s Wilhelmsen, which is one of the largest maritime shipping companies.

The 67-metre long vessels are delivered as Full-Electric Transport Ferries powered by a battery of 1,846 Kilowatt per hour (kWh) capacity.

After the commissioning of autonomous equipment and field trials in Norway, these vessels will operate as fully autonomous ferries of ASKO that can transport 16 fully loaded Standard EU trailers in one go across the fjords. The vessels being built at CSL are designed by the Naval Dynamics, Norway using Kongsberg Maritime systems, with detailed engineering carried out by CSL.

These vessels are built under the DNV GL Classification and have been flagged under the rules and regulations of the Norwegian Maritime Authority in Norway. It is believed that once in operation, these vessels will create a new benchmark for the merchant shipping world in the field of Autonomous Vessels with Zero Carbon Emissions.

Calling the day "remarkable" for the Cochin Shipyard, General Manager, Business Development of CSL, Sivaram Narayana Swamy said, "Cochin Shipyard is very proud to bring a very very ambitious futuristic project for the nation. This is a project which is envisaged by one of the most advanced nations in the world, Norway, which is working hard for the zero carbon emission green digital transportation solution.""They are pioneering in this technology and have shortlisted Cochin Shipyard to work in this program. The project was discussed in 2019, and the Cochin Shipyard was selected as the yard in July 2020 after a worldwide shortlisting. We signed the contract virtually as no person came over here from Norway due to the pandemic situation," he added.

Highlighting the uniqueness of the project, Swamy further said, "This can carry 16 European Union trailers and is meant for shipping the trailers from one port to another. These vessels are fully green, working on batteries that have a 1,846-kilowatt per hour battery that gets charged quickly.

"After they trail in Norway, these vessels will also run as the full autonomous vessels, which means there will be no personnel required on the board. It will take care of all the operations itself through the already integrated command and controls in the system. This is a path-breaking revolutionary project for the world itself," he said while calling the project "first of its kind".

Expressing hope for more such projects, Swamy expected that "India as a nation will demonstrate its capabilities and capacities in the new frontiers and make the world more sustainable, greener, and more carbon-free." (ANI)