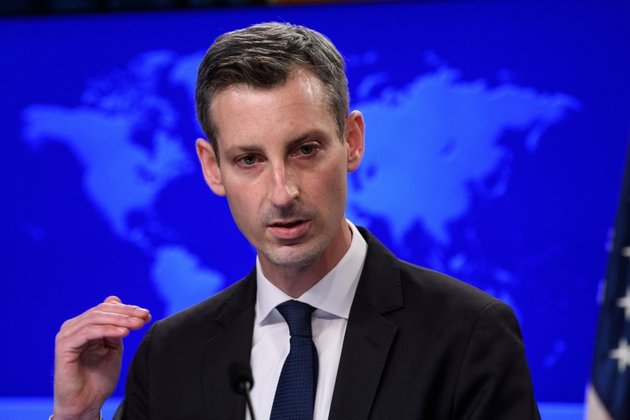 U.S. State Department spokesperson Ned Price discussed protests in Iran after the death of a 22-year-old woman while in the custody of the country's morality police, as well as Russia's war in Ukraine, in an interview with VOA Persian's State Department correspondent Guita Aryan.

This interview has been edited for brevity and clarity.

VOA: So the Iranian president talked a lot about justice in general, and specifically about Iran, but at the same time we've seen demonstrations, people have taken to the street regarding Mahsa Amini's death while in custody of Iran's morality police. Can you talk a little about that?

STATE DEPARTMENT SPOKESPERSON NED PRICE: It's a very simple fact. Mahsa Amini should be alive today. The only reason she's not is because of the brutal repression that the so-called morality police exercised against her. And what we're seeing, the same type of repression and brutality that Iranian authorities are implementing or employing against their own citizens, their own citizens for undertaking what is a universal right to them to people around the world - the right to peaceful assembly, to freedom of expression. We've seen these protests continue in recent days. Again, peaceful protests being met with horrific violence. This is a hallmark of the Iranian regime, and it's something that the whole world is watching.

At Least 9 Killed as Iran Protests Over Woman's Death Spread

VOA: The Treasury today sanctioned a number of people affiliated with the morality police. Do you think sanctioning is going to make any difference?

PRICE: It's one important measure of accountability. We want to do two things. We want to make very clear that the United States and the rest of the world stands with people around the world who are exercising rights that are universal, rights that belong as much to the people of Iran as they do to citizens of any other country. Freedom of expression, freedom of assembly, freedom of speech, freedom to communicate. We stand with all of those who are peacefully exercising that right.

VOA: Critics of the Iranian president (Ebrahim Raisi) being here are saying that given what's going on in Iran, he shouldn't have been allowed here. Not only what's going on right now, but also his background in having a hand in repression of people or killing of other people. What do you have to say to them?

PRICE: Well, as the host of the U.N., we are generally obligated to grant visas to world leaders who are traveling here to attend U.N. meetings. The Iranian mission, the Iranian delegation here is under restrictions in terms of where they can go and what they can do in New York City other than attend meetings here at the U.N. But it's also important that while he's here, the Iranian president is hearing very clear messages, messages from around the world, from the United States, from countries around the world standing with those who are exercising what is their universal rights, the right to peaceful, freedom of assembly, freedom of expression.

Iran, West at Odds; US Sees No Breakthrough on Nuclear Deal at UN

VOA: Regarding the nuclear negotiations, the Iranian president said that Iran is not looking for nuclear weapons, and that the ball is in the U.S. court. So where do we go from here?

PRICE: Well, the opposite is, in fact, true. And I think you know that we have been engaged in a sincere and steadfast effort for the past 18 months or so, to see if we can achieve a mutual return to compliance with the JCPOA, because we want to see these verifiable, these permanent limits, once again, imposed on Iran's nuclear program, and in a way that would allow the entire world to see and to verify what Iran's president says is the case, that Iran's program is entirely peaceful. The virtue of the Iran deal is that it would be verifiable, it would allow the world to see for itself the truth of those statements.

The only reason we haven't been able to achieve a mutual return to compliance with the Iran deal is because of the intransigence of the Iranian delegation. As you know, we've been exchanging proposals on that text that the European Union put forward. Unfortunately, the latest Iranian response did not put us in a position to close the deal. In fact, it took us backwards. We continue to believe that there's a window of opportunity to return to the Iran deal on a mutual basis. We're going to pursue that outcome for as long as it remains in America's national security interests.

VOA: The Russian war against Ukraine is a major issue and topic of discussion at the U.N. Is there an actionable way of stopping, preventing people, Ukrainians, from getting killed?

PRICE: Secretary [of State Antony] Blinken delivered a very simple message today, and in some ways, you can distill it down to one sentence. He said, 'If Russia were to stop fighting today, the war would end. If Ukraine were to stop fighting today, Ukraine would end.' This is a war of territorial aggression that Russia has been waging against its peaceful neighbor. And what's most important, and one of the core objectives of some of today, was to continue to galvanize the rest of the world to speak clearly, to speak consistently and to speak with one voice about the need for Russia to end this brutal war, about the need to stand against this aggression, and to stand with our Ukrainian partners.

We and dozens of other countries around the world are doing that. We are providing them with billions of dollars in security assistance, more than $15 billion since the start of this Russian aggression, as are other countries. And we're holding Russia to account. We, just as we said we would, have enacted massive costs and consequences on key Russian leaders, on key Russian institutions responsible for this war. We're going to continue to provide support to our Ukrainian partners and to increase pressure on Russia for as long as it takes.

Ukraine Takes on Urgency at UNGA

VOA: But that doesn't seem like it has stopped Russian President Vladimir Putin from continuing the war.

PRICE: Russia is increasingly isolated. I think it was pretty telling that today in the Security Council, [Russian] Foreign Minister [Sergey] Lavrov ... came in just before he delivered his remarks and left just after he delivered his remarks. If anything, that's a sign of weakness. It's a sign of the fact that Russia increasingly recognizes that even its long-standing partners are distancing themselves from Russia. We saw this in Samarkand [Uzbekistan] last week when tough messages were delivered to Vladimir Putin. We saw that earlier today in the Security Council, where country after country condemned this aggression and called for Russia to halt its invasion of Ukraine.