Live: US approves additional$400 million in military aid to Ukraine 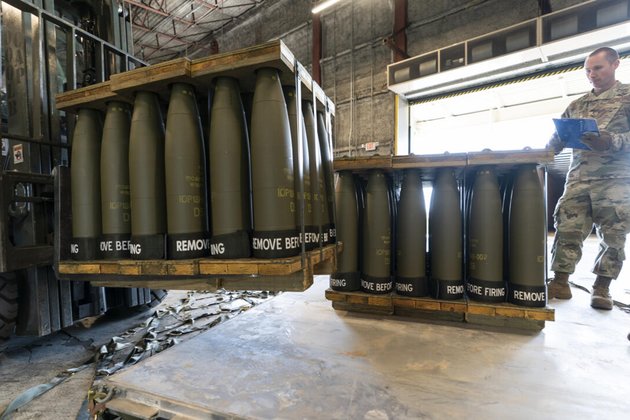 The United States will send another $400 million in military aid to Ukraine, US officials announced on Wednesday, as Russian strikes targeted energy infrastructure in Kyiv and other regions of western Ukraine, leaving millions without electricity and causing power cuts in neighbouring Moldova. Earlier in the day, the European Parliament declared Russia a "state sponsor of terrorism", accusing its forces of carrying out atrocities. Follow FRANCE 24's live coverage of the war in Ukraine. All times are Paris time (GMT+1).

5:20pm: US approves additional $400 million in military aid to Ukraine

The United States has authorised an additional $400 million in military aid to Ukraine that will include weapons, munitions and air defense equipment, Secretary of State Antony Blinken has said.

"The artillery ammunition, precision fires, air defense missiles, and tactical vehicles that we are providing will best serve Ukraine on the battlefield," Blinken said in a statement.

The White House said the new package of aid will be provided through presidential drawdown authority, which allows the Pentagon to take weapons from its own stock and quickly ship them to Ukraine.

The Biden administration has provided $19.7 billion in military assistance to Ukraine since the start of Russia's invasion on February 24 and tens of billions more in aid.

Two weeks after Russia's occupying forces pulled out of Ukraine's Kherson, the local population is still coming to terms with eight and a half months of often brutal occupation - and assessing the damage Russian forces left in their wake. Our team on the ground sent this report.

Energoatom said in a statement that, "due to a decrease in frequency in the energy system of Ukraine", emergency protection was activated at the Rivne, Pivdennoukrainsk and Khmelnytskyi nuclear power plants.

2:48pm: Half of Moldova without power after Russian strikes on Ukraine

The Russian missile strikes on Ukraine's energy infrastructure have caused blackouts across half of neighbouring Moldova, says the country's deputy prime minister.

"Moldelectrica, TSO (transmission system operator), is working to reconnect more than 50% of the country to electricity."

Power outages were also reported in the unrecognised, Russian-backed breakaway region of Transnistria, the local interior ministry said in a statement.

Russia has launched new missile strikes on western Ukraine, hitting at least one critical infrastructure target in Kyiv as explosions echoed across the capital. Three people were killed and six injured in Kyiv, according to city officials.

The western city of Lviv was left completely without power, according to its mayor. "The whole city is without power. We are waiting for additional information from energy experts," said Lviv Mayor Andriy Sadovyi on social media, warning that there may also be interruptions to the city's water supply.

Air sirens were heard across Kyiv as Russian strikes hit the Ukraine capital, damaging energy infrastructure, in the latest in a series of systematic attacks that has caused nationwide blackouts as winter sets in.

"The enemy is launching missile strikes on critical infrastructure in Kyiv city. Stay in shelters until the air alert ends," Kyiv city administration said on social media, with mayor Vitali Klitschko saying infrastructure had been hit.

The European Parliament has recognised Russia as a "state sponsor of terrorism", accusing its forces of carrying out atrocities during its war on Ukraine.

The move by the European legislators is a symbolic political step with no legal consequences, but MEPs urged the governments of the 27-nation EU to follow their lead.

"The deliberate attacks and atrocities carried out by the Russian Federation against the civilian population of Ukraine, the destruction of civilian infrastructure and other serious violations of human rights and international humanitarian law amount to acts of terror," a resolution approved by EU lawmakers said.

Ukraine's security service said it seized "pro-Russian literature" and cash and interrogated dozens during raids of several Orthodox monasteries that spurred a backlash from the Kremlin.

The Ukrainian security service on Tuesday conducted raids at several locations including the 11th century Pechersk Lavra monastery in the capital Kyiv, a UNESCO Heritage site, over suspected links to Russian agents.

After searches in more than 350 church-linked facilities, the SBU said Wednesday it had turned up "pro-Russian literature, which was being used in seminary and parish schools, including for 'Russian world' propaganda".

10:46am: Moldova accuses Russia of energy blackmail, 'ready for any scenario'

Moldova said on Wednesday Russia had sent no signals that it would stop supplying it with gas next month but that it was ready for any scenario because Moscow was using energy resources as "a tool of blackmail".

State-run Russian gas company Gazprom accused Ukraine on Tuesday of keeping gas supplies destined for Moldova, and that it could from November 28 start reducing gas supplies to Moldova that pass through Ukraine.

Ukraine, which has been invaded by Russia, has denied withholding Russian gas meant for Moldova. Chisinau, which is dependent on Russia for its gas, said on Wednesday it would pay for any gas deliveries.

10:37am: UK to send helicopters to Ukraine for 'first' time

Britain is to send helicopters to Ukraine for the first time since Russia's invasion, said the British defence ministry.

Ten crews of Ukrainian service personnel and engineers underwent a six-week training programme in the UK, as part of the "first helicopter capability the UK has donated to Ukraine", the ministry said.

In addition to the three former British military Sea King helicopters, the first of which has already arrived, the UK will also supply an additional 10,000 artillery rounds.

Pope Francis said on Wednesday that Ukrainians today were suffering from the "martyrdom of aggression" and compared the war to the "terrible genocide" of the 1930s, when Soviet leader Josef Stalin inflicted famine on the people there.

He was speaking at the end of his general audience before thousands of people in St. Peter's Square.

The heads of the International Atomic Energy Agency (IAEA) and Russia's state-run nuclear energy agency Rosatom met in Istanbul to discuss the situation around the Zaporizhzhia nuclear power in southern Ukraine, Rosatom and the IAEA said in statements.

The two sides agreed to continue cooperation and dialogue over the facility, Europe's largest nuclear power plant, the RIA Novosti news agency quoted Rosatom as saying. Renewed shelling last weekend - which Moscow and Kyiv blamed on each other - raised fresh fears of a possible nuclear disaster at the site.